I don't know why it makes me sad but it does.  I refused for so long to buy a mesh unmentionables bag to wash my socks in.  It's not that I mind wearing matched socks, It's just that since I was a kid, I have worn an awful lot of mismatched for the simple reason that it's a waste of time and energy to go about searching for all the missing socks just to find a matching pair, so long as you have two feet and two socks to put on them.  *sigh*  I swear the universe is trying to teach me some lesson.  It's reached epidemic proportions.  I've slid by for the past couple of years on weather and not needing to wear socks for too many months of the year.  (hail the central coast!) But for the past two years in a row almost all of my new socks have disappeared, it's been a cold winter, and all of my few remaining socks are worn out.  It's the perfect storm.  And as a result of this storm of sock drama, today I purchased the disavowed bag in which to wash my socks.  12 new pairs went in, 12 new pairs came out, and alas they are all matched and sitting in my sock drawer.  I feel like a little piece of me has not died, but kissed never never land goodbye. 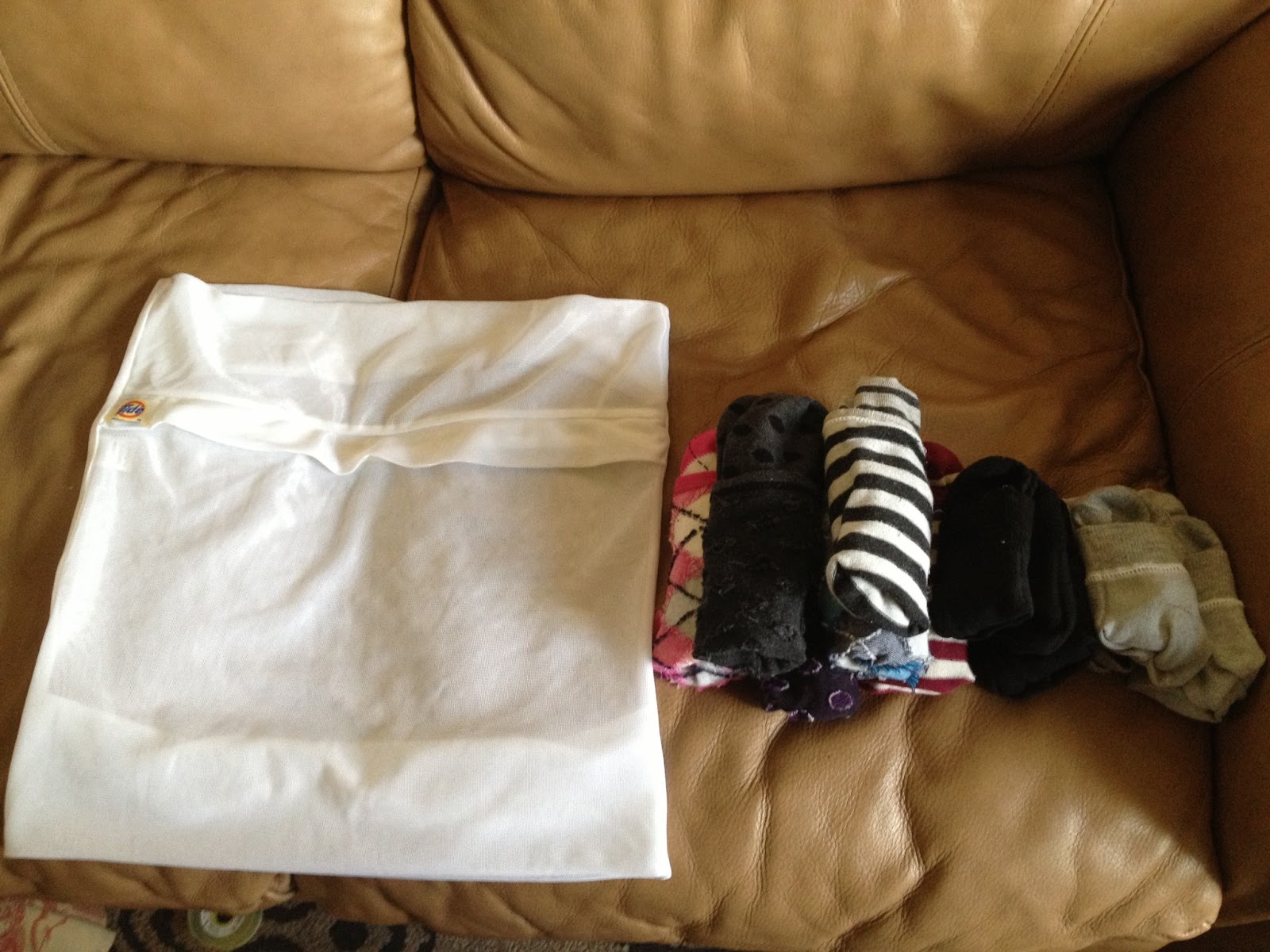 I am way more confused that sad really.  I mean, I have a 6 1/2 and a 4 1/2 year old.  Granted, a lot of their socks spend time in the lost sock box, but most of them eventually come out of there!  And a lot of socks have made it through both kids before wearing out, and those are some tiny pieces of clothing!  Then there's my Mom who bypasses the problem entirely by having 700 pairs.  No joke, she's kind of bachelory in that she'll buy more rather than launder sometimes.  I have vowed several times to never again sort her socks but every so often I still do, since I pilfer her collection when I get desperate for footwear, which has happened increasingly of late.  Which led to an interesting dilemma at Target today.

I stood in the hosiery aisle at Target after having thoroughly secured my "Mommy" status by being there at 9:15AM and having a cart filled with clothespins, kid hangers, a mesh bag, and bananas, and contemplated my options.  There were long funky but cheap looking sock, ones I could see myself wearing and my mom not stealing, ones I could see myself wearing but my mom stealing, and just old boring ones like my mom would wear to work.  Funny thing about my Mom is that she thinks she doesn't steal my clothes, but she totally does.  But like I said, I "borrow" her socks so...anyway, I went with the ones I thought she would be least likely to steal, inadvertently or otherwise.  (advertently?)  But now to keep my feet warm, I can't just throw my sock willy nilly on the floor in the hallway with the rest of the laundry! What a dumb piece of grown-uppery! I was bullied into shaving my legs when I was 12, and plucking my eyebrows around 19.  Mesh bagging my socks in my 30s, what's next, watching Downton Abby?!  I just started watching 30 Rock!!!
Posted by shirlena-rae at 5:11 PM 2 comments:

Light Sabers Have No Dairy

I have an idea about letting go.  I'm so overwhelmed right now by 3 1/2 days of migraine that it's hard to even write about it.  Has it only been 3 1/2 days?  It feels closer to 2 weeks.  *moaaaaaan*  Anyway, I have all this old music I need to let go of, which I think means put on youtube when I get the energy.  Which means who knows when?  But instead of holding onto it because it's old and I think it sucks now or whatever, I just need to let go of it and let it encourage who it may.  (and also let people laugh at it, but it's all good)  It's not doing anyone any good cooped up in the recesses of my brains.  So, I have a goal.  But I also have an obstacle: Adjusting Meds.

Adjusting Meds=the devil.  I am depressed because there is no winner in the game of pick-which-med-I-get-to-be-on.  Which meds do I want to be on more of, the preventative kind or the attack-the-migraine kind?  One makes me lose weight and my hair fall out, and one has a slight risk of heart attack, and either way I'm exhausted!  Either I'm exhausted but slightly functional and don't have a full-blown migraine, or I'm exhausted, non-functional, and defeated because I have a full-blown migraine, and am on lesser amounts of preventative meds but more attack-the-migraine meds.  Or maybe it was just that I was travelling and then it was the "holidays".  The only way to find out is to wait a few more months and see it I survive.  Letting go...

Alright, good news.  Still no tummy aches or toilet weirdness for Sasha sans dairy.  $#*!.  I like dairy. At least dairy isn't in everything like wheat and corn.  Also my Mom is back from her travels so I am no longer alone with my little blessings AND the ants AND a migraine.  Things are looking up!  Also marshmallows have no dairy.  Music has no dairy.  Light Sabers have no dairy...
Posted by shirlena-rae at 10:53 AM No comments:

December 14, 2012
If I were going to write now, it would surely be something about my life that is changing.  Changing, finally changing after so long caught in a rut grown crusty.  Everyone knows that change sucks right?  Well, not all change sucks of course, but all change is difficult on some level at least.  And if I could pick what changed, surely I would pick that my migraines would cease, immediately and forever, and that Emily’s migraines would cease immediately and forever.  Hah, but that is not what’s going on, although I don’t know how unfortunate that is exactly.  For sucky and painful and difficult ‘though change can be, infinitely greater can be the reward.

I am out of the rut, and slammed into the learning curve.  It’s wicked steep I’m finding.  It’s kind of like when I was in that awful marriage, I didn’t have time to process how truly awful it was, I was just trying to plow through to survive.  Since extracting myself from that situation I’ve had to do a different although much better type of plowing through to survive.  The survival has been much healthier to be sure, but there’s been plenty of stress, and only now am I discovering what it’s done to me, how I’ve handled it.  And oh my...revelation is kind of flying at me!  I have trusted God with an awful lot, but I need to Not stop.  I have taken many steps of faith, but there are MANY more to be taken.  I have gotten incredibly run down in my walk with God.  Migraines, kid with migraines, schools vs. food allergies, maintaining a house, trying to maintain some sort of musical life, trying to maintain some sorts of friendships...oh right, ministry.  Love God and make him known.  Make disciples, pray your face off.  I remember these things now a little.

I’m on a plane, going to a reunion of a young adult group that I helped start and run for a couple of years, oh so long ago before I had kids, when I was first married and first discovered that said marriage was in deep shit.  Transparency and Accountability was our young adult group mantra.  Is this my restart?  Interestingly enough, we met at and because of a Christian radio station called the Lighthouse, and the building is in fact shaped like a lighthouse.  WECC, FM 89.3 (Jacksonville 92.9, Waycross 105.9) (http://www.thelighthousefm.org/) It’s been calling me back for many years, and finally I’m coming home to the Lighthouse, at Christmastime no less.  Bring. It. On.

January 3, 2013
I’ve been home for exactly 2 weeks, and I’ve been telling people that it feels like I was on a 3 week mission trip that got crammed into 5 or 6 days.  I’m not even sure how to go about processing everything that went on.  Perhaps more than anything I came away feeling encouraged and validated, having been able to encourage and hopefully validate the dozens of people I met and interacted with.  I spend so much of my time feeling defective and lame, fighting just to make one end of one day meet the beginning of the next.  And in Georgia (well, JAX) from the time the plane hit the ground to the time it took off again, I got to engage people I love and miss, and even some I just met for the first time, all because I used to be involved face first in ministry, because of the road I’ve walked, because God has never left.  And probably, because I am lame and defective.  I can’t forget that part.  And probably he’ll keep using me.  Hm...

There were consequences of course to my sad body.  I was on attack-the-migraine meds the whole time, culminating in don’t-drive-when-you’re-on-these meds by the last day.  *shrug*  What do you do?  That’s why I have them I suppose.  Apparently I am doing so well on the Botox that we’re starting to lower the amount of Topamax I’m on!  Just because I had a migraine for a month straight the last time we tried that, does not mean that’s going to happen this time!  I swear that’s not what that means.  I swear I'm not the slightest bit worried that that's what that means.  *__*

So snap back to today’s festivities, when Sasha’s right eye hurt from the light.  (Sasha, not Emily who already gets migraines.) Back it up, Sasha’s been having random tummy aches for a couple of few months or so-ish.  So Grandma and I decided to try dropping dairy for a while to see if it helps, even though the girls have already outgrown their milk allergies, and can already not eat 5 million other things between them.  It’s only been a few days, but no tummy aches since.  Of course, her eye hurts from the light today.  (...giant.......pause...) *twitch* #notmakingthisup  Oh right, God’s timing for my trip to Georgia was stupid obvious, I’m having a spiritual reawakening, and we have been provided for abundantly, nonstop, without fail, physically, emotionally, and spiritually.  I’m not giving up peace just because I don’t get the exact change that I want.

I will wait and wonder, about ministry, about my life, and about my children.  Heh. It’s kind of funny to be back on the rice milk, because each of the girls had a slightly different name for it when they were still in diapers. Memories.  (: Good thing we decided to drop dairy AFTER I started letting go of things, otherwise I would have really freaked out.  Wait a second, cows eat corn, even organic cows I bet!  Stupid Corn!!!  Once Sasha’s tummy’s clear for a while I was thinking of getting my rear in gear and going for the raw grass-fed cow milk.  Or maybe one of the other 17 options flying around in my head.  It really does seem like too much at times, but then another breath happens.  And look, one more.  And what was I saying about prayer and worship and people?

"I will wait for you, Jesus.  You're the sun in my horizon.  All my hope's in you, Jesus.  I can see you now arising."  Jason Upton
Posted by shirlena-rae at 9:38 PM No comments:

shirlena-rae
3 migraine journals, strategically placed Epi Pens, 2 kids, 1 mom, no nuts, corn/corn products or gluten in sight, too many migraine meds between us, and some guitars in there somewhere too. This is us trying to play nice, while simultaneously not letting the world kill us. We tend to sing a lot.